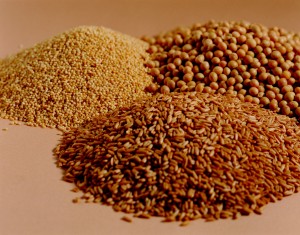 Whole grains are extremely nutritious offering benefits such as:

Fiber, B vitamins, magnesium, and iron are just a few of the extra value-packed nutritional benefits of grains.

But for those of us with Celiac disease or on a gluten-free diet, you may be thinking that your choices are slim to none, but that’s not necessarily true.

Many people are aware of the most common grains but there are some little known grains that are gluten-free naturally and pack a powerful healthy punch if you include them into your diet.

Although most people think of it as a grain, quinoa is actually a gluten-free super seed, from the Goosefoot plant, and is part of a group of pseudocereals, making it neither a cereal nor a grain. It can be cooked and used in recipes just like rice, but this little seed packs a powerful health punch. The history of quinoa dates all the way back to the Inca civilization. The Incas considered it to be a sacred grain and for a very good reason. Quinoa is considered a complete protein. It is also full of fiber. Quinoa is a perfect way to start your morning, and the fiber will help you feel full for the day.

You can add things such as chicken broth and eat it for lunch, or add some honey and maple syrup with cinnamon for a tasty and nutrition-packed breakfast.

Just like the Incas and their quinoa, the ancient Aztecs knew that chia was a powerful substance and main staple for their diet. Chia is super packed with Omega 3’s, loaded with protein, and one of the lowest carbohydrate grains. For this reason, many athletes are turning to chia as part of their daily winning game. Being high in antioxidants increases the value of chia in your diet as well.

The ancient Aztecs also knew that this grain was valuable to them. They not only included it into their everyday diets but also offered it as part of various rituals and ceremonies. Plant proteins, amino acids, lysine, calcium, vitamin C and iron as well as a high fiber content make this particular grain the one that has it all.

Also a seed or more commonly called groats, buckwheat is packed with protein and fiber, but is also naturally gluten-free.  One cup of cooked buckwheat groats contains:

And all of that is just 155 calories. Buckwheat flour is an excellent substitution to regular gluten-free flours especially for pancakes for breakfast. Here’s a recipe for buckwheat pancakes

Sorghum is actually a grass and just a few of the health benefits of sorghum are:

When using sorghum in gluten-free baking, it mimics gluten, so it helps to make your gluten-free bread more elastic and better tasting.

I hope you try some of these little known, gluten-free “grains” in your baking and cooking. Let me know in the comments below if you do.