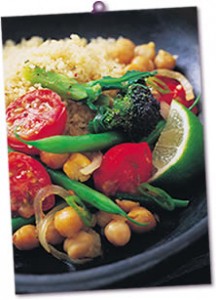 Meatless Mondays! If you’re like me, you just may have thought that this was something new invented by Vegens or Vegetarians, but that wouldn’t be true. Meatless Mondays was actually started and encouraged during World Wars I and II, when rationing meat and other staples became part of the overall war effort.

Nowadays, we’re more aware of the health benefits associated with eating less saturated fat found in red meat, (these types of fat pollute our arteries and can harm our hearts). Going meatless at least one day per week can dramatically reduce your bad (LDL) cholesterol and triglycerides that cause strokes, heart disease and other health problems.

Eastern cultures have been touting less meat for generations, and scientific and medical reports have found that those cultures are the healthiest in the world. Obesity is also less of a problem in other cultures that practice mostly vegetarian lifestyles.

One reason that meatless Mondays is being promoted in America is because of the obesity problems that exist in both children and adults. Obesity is causing a strain on our medical system, early deaths and chronic diseases – and leaders are now realizing the importance of eating healthier.

Schools and hospitals have adapted to the nationwide promotion to eat less meat, and meatless meats (plant based food) are being developed that mimic meat in both texture and taste, giving you options that were never offered before.

Give meatless Mondays a chance to improve your health and help you lose unwanted pounds. Browse online for some meatless recipes that appeal to you and be adventurous in trying new ideas that will boost you and your family’s health and welfare.